The first step of the project was to create a 50 and make sure that it was the right size in order to fit 1200 people in it. So the easiest way I knew how to do that was to use a little bit of maths. I measured my shoulders and found that my shoulders were about 500mm apart. I then used some grid paper. I then scanned the grid into the computer and used A pixelated font in order to get the shape of the 50. then from there I scaled the 50 until I believed that It was the right size. I then broke down each of the sections of the shape and counted how many people were in each. This was the base of the 50 shape.

The next step was to take the photo. The problem was how to get the height to look down upon everyone. This changed a number of times after doing a number of test to make sure that I got the shot that I wanted. The location needed to be in a large open space, That there was a building nearby or a location where a cherry picker could be parked. The location was easy which was the large oval of the college. But getting a cherry picker was the next step. really early on when I was planning I did not know that one of the staff had a licence so I made more work for myself trying to find another way. one of which was the possibility of getting a drone to fly over and take the photo for us. But for safety reasons that idea never came to be.

So the next step from there once the cherry picker was hired was to draw out the 50 on the ground otherwise we would have been there forever trying to get everyone to fit properly. This was a simple task as I had already made the plan using the grid. Knowing that each grid square was 500mm I could just count the squares and get measurements for the space. So with a wheel measure and some grass spray paint I help mark the shape out. With the assistance of a team member from the maintenance team at the College.

From there I then went up in the cherry picker and did a test photo. The camera that I was using for this job was the Canon 7D with a 24-70mm lens which was not very wide at all. So I decided rather than reset I would fix it in post. Mind you I had only used the panorama feature a handful of times with mixed results and was not sure that it was going to work. So in my test I took a number of shots both trying vertically and horizontally, then stitched them all together. I was finding that I had to take to many photos and when sitching that the photo created to much of a fish eye effect. So I needed a new lens. It was very lucky that I knew another staff member at the college had a wider lens that did not go into fish eye. by the time I got the lens there was no time to test the effect. So I just ran with it. Creating the amazing shot that you see below.

Getting everyone into place was no easy feet. We had all the students line up in their year groups, and the had them go in height order trying to keep the taller students at the back and the shorter ones towards the front. With my moblie, I communicated to a staff member on the ground who helped get everyone into place. Once they’re It was only natural to take a selfie to mark the occasion. Then it was time for the show to begin. I took many photos in the vertical format because I believed that this was the best way to capture the scene. I also captured the building as well because I noticed half way through taking the photo that the background (the College) was just as important part of the shot as the students were. 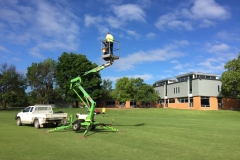 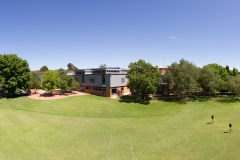 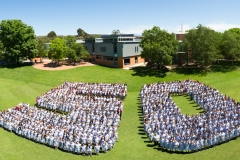 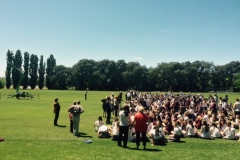 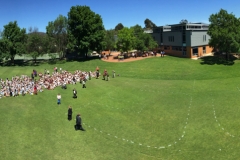 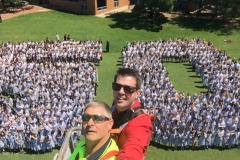 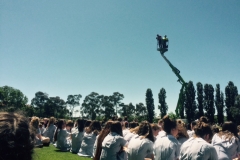 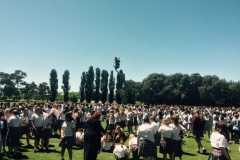 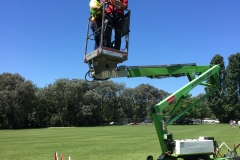 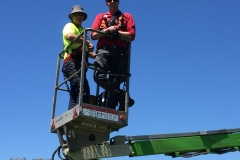 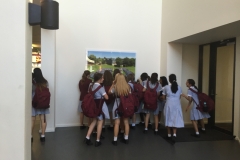 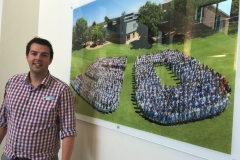 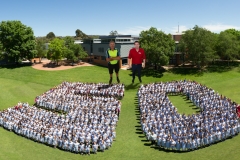